Chimney problems can affect the operations of your fireplace and the safety of your home.  It is important to keep your chimney well maintained and fix problems before they worsen.  Being aware of potential chimney repair needs and acting early saves money.  We recently repaired a chimney crown for a home in Fairfax that would have cost significantly more if the homeowner had waited until the winter.  Addressing chimney issues gives the added benefit or ensuring that you and your loved ones can continue to enjoy the pleasure of creating new memories while gathering near a warm fire.  Below are some of the most common chimney repair problems that homeowners encounter.

While the list below doesn’t encompass all the problems that might occur with a chimney, it does provide you with an overview of those that are most common. 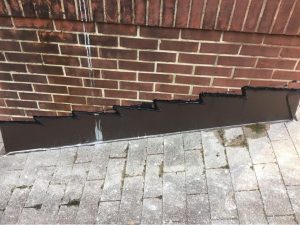 Chimney flashing is used to seal the space between the roof and the chimney. The installation of chimney flashing is a process that requires both skill and experience in order to create a seal that is watertight.

Over time, water can get through the flashing. This can also happen if there is rust around the nails or if the flashing was not correctly installed in the first place.

Unfortunately, leaks of this nature often go undetected. This can result in significant damage to the ceiling in the attic. In some cases, the roof might also experience a lack of structural integrity.

At least once every few months, it’s a good idea to do a visual inspection of the area of the attic where the chimney is located. Pay particular attention to the ceiling. If you see any areas of concern, contact a professional chimney repair company to assess the issue and make the necessary repairs. 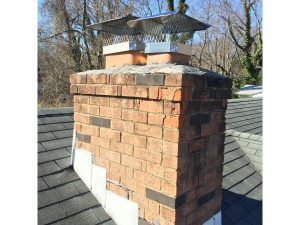 A cracked chimney crown, or one that is otherwise damaged, is another example of an issue that you’ll likely never be aware of. This is because the chimney crown is located at the top of stone  and masonry chimneys.

Designed of mortar mix, the crown seals the chimney from the flue liner edge to its outer edge. It’s designed to prevent water from being able to enter the chimney’s cavities and walls. The crown also acts as a barrier so rainwater isn’t able to get in between the masonry face and the flue liner.

Over time, the condition of the chimney cap can be affected by weather, erosion, chipping and cracking. This could lead to moisture getting inside cracks in the mortar. If this condition is discovered early enough, it might be possible to repair the crown.

However, in some cases, the chimney crown needs to be completely replaced In order to prevent this from happening in the first place, it’s a good idea to have the cap waterproofed. Having the chimney crown inspected by a professional at least yearly ensures that its condition is properly monitored. 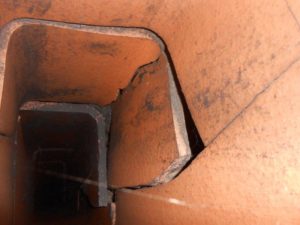 The chimney liner and its condition is one of the most important components of a well-functioning chimney. A chimney liner is a conduit that is installed inside the chimney. Made of metal, clay or ceramic, the chimney liner is designed to keep the combustible materials contained and protect the chimney’s walls from corrosion and heat. It directs any combustion products to the outside of the home.  It’s important to realize that a chimney liner typically has a much shorter lifespan than the chimney masonry. While the liner deteriorates over time, there are other conditions that can hasten its failure as well.

If the chimney has a great deal of creosote present, this can reduce the lifespan of the liner even further. The presence of moisture that combines with the creosote can increase the amount of wear as well. Creosote build-up is a commons cause of chimney fires.  Damage to the liner can lead to costly repairs.  Even the smallest tear or crack in the chimney liner can make the home or building susceptible to water damage.

Chimney liner damage can only be found during a chimney inspection.  This is one of the many reasons why the Chimney Safety Institute of America (CSIA)  recommends that all chimney be inspected every year.

These common chimney problems can be costly if they aren’t discovered early. In some cases, they can compromise the safety of your home.  It’s a good idea to schedule a complete chimney inspection by a reputable company like ours at least once a year. However, if you suspect that there is an issue, schedule an inspection as soon as possible.